Roy Chadwick was an aircraft designer who as a boy flew model aircraft covered in the remnants of his mother’s silk blouses in a field in Urmston, then in Lancashire, in the early years of the 20th Century.

Aviation was seen as the pursuit of eccentrics and ridiculed, hence the young Roy’s visits to the field at dusk, when fewer people were about.

As Avro’s chief designer, he went on to create the Avro Lancaster, the most heavily-used bomber for night raids during World War Two and famous for its role in the Dam Busters raid.

Roy Chadwick was sketching out ideas for what became the Avro Vulcan bomber early in 1947, but died in August of the same year testing one of his prototype passenger aircraft which crashed over Woodford, Cheshire, near to the Avro factory. 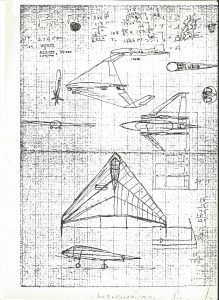 Pictured is a copy of those rough sketches of a delta-wing aircraft found in a bedside drawer following his death. Avro won the government contract to build the UK’s first nuclear bomber, and exactly five years after Roy Chadwick’s death, test pilot Roly Falk took a prototype Vulcan bomber into the skies for the first time.

I had the privilege of befriending Roy Chadwick’s daughter, Margaret Dove, through a BBC Radio Manchester  documentary I co-produced with Peter Batson on the building of the Lancaster.

My poem is special for another reason…I wrote it in around 30 minutes in my only moment of pure inspiration. I’d not written poetry for a long time. Then I opened a letter from Margaret Dove telling me about her father’s silk-covered model aircraft – and the words simply flowed.